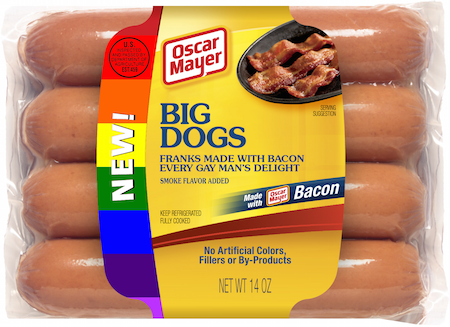 Recently, Frito-Lay came forward with their “Doritos Gay Rainbow’s” bag to show their support for LGBT issues. But shortly after, Twitter users vowed to boycott Doritos after the new Gay Rainbows LGBT campaign was announced.

Even so, the largest hotdog manufacturer in the world, Oscar Mayer, has also decided to step up and show their support for LGBT by releasing their “Big Dogs Gay Rainbow’s” packaging.

“Gay Wieners”, as most people are referring to them, will be on store shelves beginning September 27. But their more anticipated release of the “Bun Size Gay Rainbow Hotdogs” will debut at Atalanta Pride in Atlanta, Georgia on October 10.

They are expecting a sellout crowd! And of course – who doesn’t love some gay wieners?

Well, apparently there are a lot of people that don’t like gay wieners because Twitter is blowing up with negativity. Either way, Gay Pride 2015 has several more events through the end of the year, so I’m sure Oscar Mayer will have no problem making their profits!

This product is only for a limited time, so make sure to get yours!