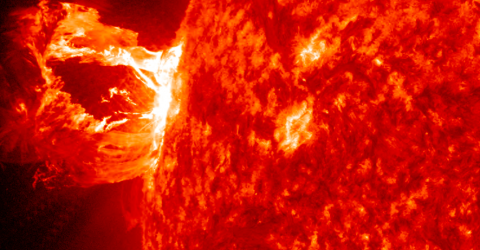 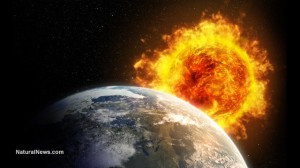 NASA Admits: The World Almost Ended 2 Years Ago. So what were you doing on July 23, 2012? I’m sure if you had this information, you might have been hiding in an underground bunker. But instead, we were all unaware, and going on with our daily lives. But the truth is, our planet almost plunged into a global catastrophe. The recent admission by NASA explains how on July 23, 2012, Earth had a near fatal miss with a solar flare. The solar flare, or coronal mass ejection (CME), experienced on that day was the most powerful storm on the sun in over 150 years. NASA, the media and government officials decided not to let us know what was happening, probably to avoid massive global panic.

“If it had hit, we would still be picking up the pieces,” says Daniel Baker of the University of Colorado. Luckily, the suns aim narrowly turned away from Earth just a few days before the event. If it had occurred a week earlier, when it was pointing at us, the results would have been disasters. “I have come away from our recent studies more convinced than ever that earth and its inhabitants were incredibly fortunate that the 2012 eruption happened when it did,” says Baker. “If the eruption had occurred only one week earlier, Earth would have been in the line of fire.” 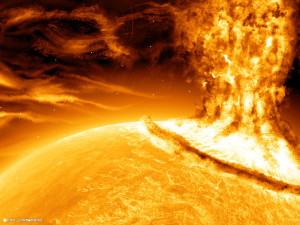 According to Baker, the power of this solar flare would have sent us back to the Dark Ages. If this type of storm, or CME, would have hit the earth it would have wiped out communication networks, GPS and electrical grids to cause widespread blackouts. Baker goes on to say, “It would disable everything that plugs into a wall socket. Most people wouldn’t even be able to flush their toilets because water supplies largely rely on electric pumps.” It would cause chaos and disaster on an epic scale. According to the study by a National Academy of Sciences, the economic impact would exceed $2 trillion, 20 times greater than the cost of a Hurricane Katrina. Multi ton transformer damages of this type of storm could take years to repair.

Physicist Peter Riley, who published a paper titled “On the probability of occurrence of extreme space weather events,” calculated that the odds of a solar storm strong enough to disrupt our lives in the next 10 years is 12%. “Initially, I was quite surprised that the odds were so high, but the statistics appear to be correct,” says Riley. “It is a sobering figure.” The CME that almost hit the earth set off 2 ejections within 10 minutes of each other. If it had went off four days earlier, it had a clear effective path to destroy the earth. Remember, they know so much more than they tell us… CLICK HERE —> TO LIKE DAILY BUZZ LIVE ON FACEBOOK!