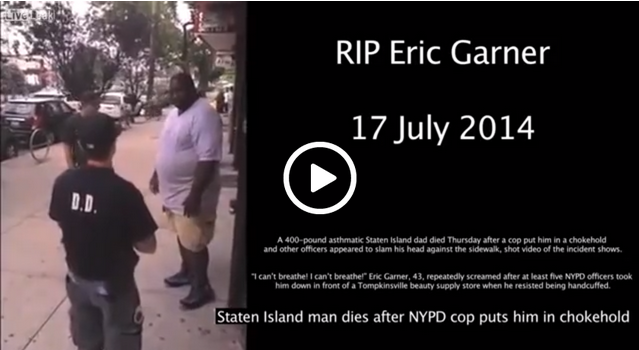 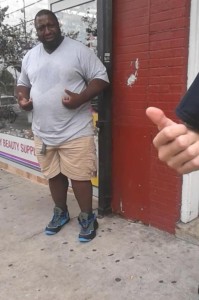 NY Man Wrongfully Killed By NYPD. On Thursday a New York resident was the victim of another very tragic act of police brutality and over use of force. The man was apparently an asthmatic and the police put him in a chokehold before slamming his head on the ground. His family is demanding accountability from the NYPD.

The Staten Island man, Eric Garner, was 43-years-old and in the video that you can see below, he was begging officers to let him breathe as he was lying on the 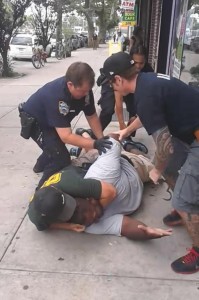 ground helpless. He died of a heart attack during the arrest, according to the Associated Press. Garner was apparently being hassled for selling untaxed cigarettes and was arrested before for the same offense. Garner, however, denied the allegations and asked an officer why he was stopped. After refusing to put his hands behind his back and telling another officer not to touch him, two others moved in to make the arrest. After the choke and slam in the video you can here Garner screaming, “I can’t breathe, I can’t breathe!”

Many people at the scene expressed a lot of anger toward the NYPD. “They jumped him and they were choking him. He was foaming at the mouth,” 22-year-old Ramsey Orta told the Daily News. “And that’s it, he was done. The cops were saying, ‘No, he’s ok, he’s ok.’He wasn’t ok.” Another witness even attested to the fact that he wasn’t selling cigarettes. 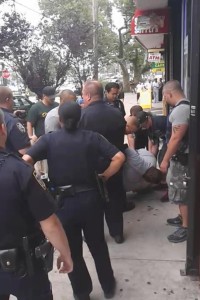 People that knew Garner had described him as a “gentle giant” and a “big teddy bear.” Garner is survived by his wife and six children. The police say that Garner “took a fighting stance” and “absolutely resisted arrest.” Well even if that were the case, in 1993, Commissioner Ray Kelly banned the use of chokeholds by officers. Check out the video below. Share it and let us know if you think that the NYPD were in the wrong: