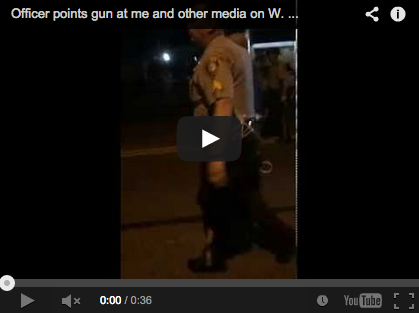 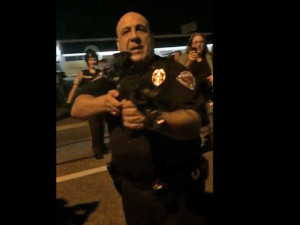 Officer Points Gun At Protesters And Threatens To Kill Them. At one of the many protests since the shooting of Michael Brown on August 9, a police officer that was supposed to be a part of the effort to keep peace during the protest, ended up causing more distress than the protesters themselves. The officer, Ray Albers, was pointing a semi-automatic assault rile at demonstrators, cursing at them and then threatening to kill one of them.

In several YouTube videos of the incident, you can see the officer in a dark-colored uniform pointing his rifle at protestors and swiveling the gun back and forth from person to person. “Oh my God. Gun raised, gun raised…gun pointed,” says one man in the video. At the same time another man says, “My hands are up, bro. My hands are up.” At that point the officer says, “I will f**king kill you. Get back, get back.” One of the men asks the officer, “You’re going to kill him? What’s your name sir?” Which the officer responds, “Go f**k yourself.” The protesters then start to refer to the officer as officer go f**k yourself.

Eventually a county police sergeant intervenes and tells the officer to put his gun down as he escorts him away from the area. As they are walking away you can see the officer put up his gun once again as protesters beg the sergeant to take away his weapon. The officer has since been suspended indefinitely. It’s because of officers like him that these protests are even happening in the first place. Watch the videos below and see why we need to get cops like this man off of the force.