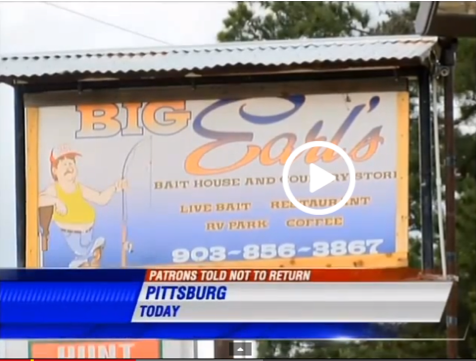 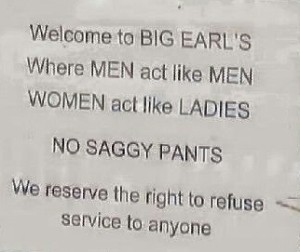 Restaurant Claims, ‘We Don’t Serve Fags Here’. A restaurant in Pittsburg, Texas has recently come under fire when one of the waitresses told a gay couple, “We don’t serve fags here,” as they were leaving the restaurant. The couple, Colin Dewberry and Kelly Williams, were finishing up a nice breakfast at Big Earl’s Restaurant when the owner’s daughter, who was the waitress in this situation, started to talk to the couple. She followed up with, “Here at Big Earl’s we like for men to act like men and for ladies to act like ladies, so we want you to never return.”

The restaurant owner Earl Cheney says that the couple had broken the rules in his establishment that are clearly posted on the front door. It seems that his daughter was actually quoting the sign when she was making her last statement. The sign reads: “Welcome to Big Earl’s. Where MEN act like MEN, WOMEN act like LADIES. No Saggy Pants. We reserve the right to refuse service to anyone.” Since apparently one of the men was touching the others leg. They were in violation of the rules. “I didn’t go over there to inspect to see what he was rubbing. That’s just not appropriate in a family restaurant that has a sign on the front door that we just don’t do that here,” said Cheney.

He believes that his daughter was not in the wrong for saying what she did. Others on Facebook however, have shown their distaste for the waitress’ comments via social media. The restaurant’s Facebook page has blown up with people taking the gay couple’s side. Either way Earl still has the right to refuse them service next time they come if he wants to. He says that many gay couples eat at his restaurant regularly with no problems. Well this may not be the case anymore once they hear about this story.