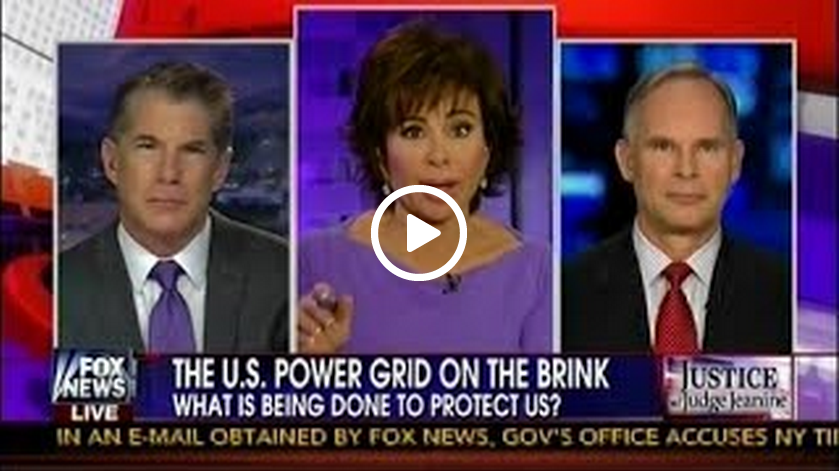 US Power Grids In Danger New World Order. What is being done to protect us and is it too little, too late? Are Americans prepared for a long-term power outage? “The question is not will it happen? But when will it happen?” Said Judge Jeanine Pirro who will host a one hour long special on power grid dangers. She pointed out that before 9/11, Americans had never envisioned such an attack taking place. Judge Jeanine discussed the alarming situation with former CIA director James Woolsey and former Navy seal Christopher Heben.

Wolseley worries that the government officials in charge of protecting the power grid have buried “their heads in the sand.” “If you take out the electrical system, everything else goes down, too. You have 18 critical infrastructures in the country, and 17 of them depend on electricity. So you lose your communication system. You lose transportation. You lose your bank teller system for getting money. Nothing works,” he explained.

According to a study by the Federal Energy Regulatory Commission (FERC), the entire US power grid could be shut down in a matter of minutes through a small-scale attack on nine of the country’s 55,000 electric transmission substations. the danger was exposed late last year when an unknown group of people were able to successfully penetrate a San Jose, California power substation, strategically cutting fiber cables and then firing over 100 rounds of ammunition into 10 Transformers. The attack highlighted how even a low-tech, small-scale attack could potentially take down an entire grid.

The 2012 report by the National Research Council, written for the Department of Homeland Security, said that the “greatest vulnerability in the event of a terrorist physical attack on the power system will likely be securing needed replacements of high-voltage transformers.” It said restoring power “could take weeks, months, or even longer.” Could this be the beginning of a new world order? How are you prepared for this “attack.”