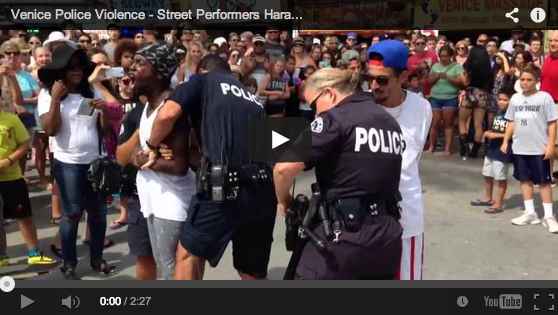 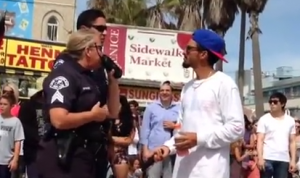 VIDEO-Police Harass Street Performers For No Reason. Once upon a time, A lot of rich people moved into Venice Beach. They realized that not only did they not have control over the artists who performed there, or how they lived, but they were also missing out on a lot of money by allowing the performers to perform for free, and collect tourist donations.

And so via due process and all proper channels, I’m sure  they were able to institute ordinance that in order to perform on Venice boardwalk, performers had to enter into a raffle, to win the CHANCE to purchase a performers permit. The primary argument for the necessity of this ordinance being that the street performers would often argue over space to perform and cause an unsafe and unattractive tourist environment.

However the heart of the community was strong. Most performers would allow other artists who did not have a permit, to utilize their own space while they themselves took breaks. They would take turns. Performers began to network so strong that, no matter who won the chances to buy permits, they would all chip in to ensure the permit was bought, and they would all share the space.

The police station that was recently built ON Venice beach, now is able to closely police the beach and parks and keep them safe from crazies and hobos. However, the majority of their resources and 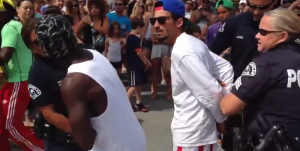 time are spent policing the performers, enforcing that ONLY the artist who holds the permit can perform on the space. I have seen police arrest and harass performers on the boardwalk for this ever since it was instituted.

Did I mention they also made it illegal for the nightly beach drum circle to continue past sunset? And they often enforce this with a helicopter and police in full riot gear? This video shows police ask performers for ID, and after they ask the police why they want to see his ID, they handcuff them without telling them why they are being detained, and without reading them their rights.

This isn’t about police brutality. This is about money.