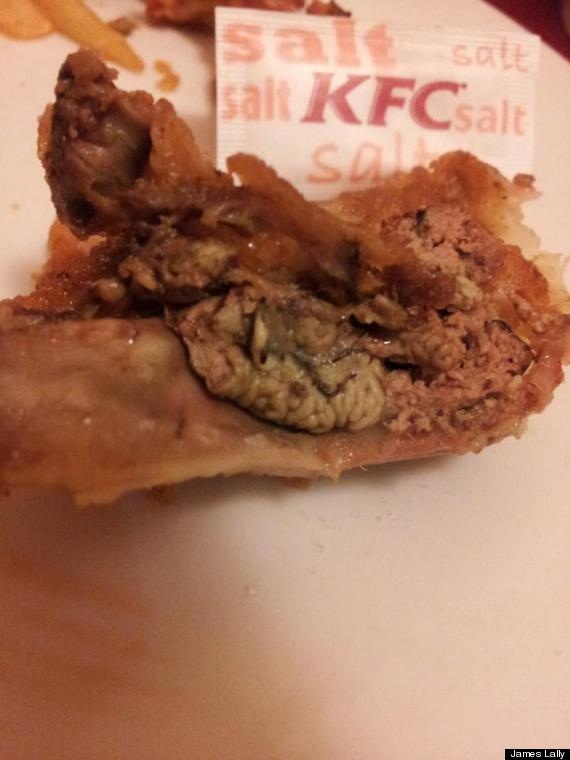 KFC Chicken Meals disgusted James Lally as he got the surprise of his life when he bought a variety meal from KFC and found a wrinkled kidney and “almost a complete spine” hidden in the KFC original recipe piece. 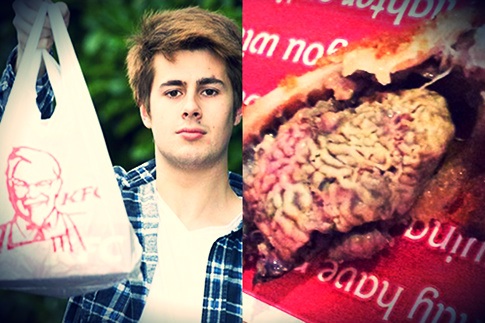 He bought the KFC chicken meals for himself and his girlfriend at the London Road restaurant in Brighton. The 22-year-old’s girlfriend made the gruesome discovery after she already had eaten most of the chicken.

“I tend to stay away from the original recipe chicken inside these KFC chicken meals for these kind of reasons”, Lally told reporters. “Ironically, we got the 10 piece variety bucket to share. We had eaten most of the KFC chicken when we found an intact spine complete with their secret blend of herbs and spices. We joked about finding more then my girlfriend came across the kidney.”

Lally is not the first student to find foreign bodies in his KFC chicken meals. In January another student found what he thought was a “wrinkled brain” in his value meal. That 3 inch organ was later confirmed by KFC staff to have been a kidney.

A spokesman for KFC stated “We are really sorry for Mr. Lally’s experience. We sell over 2 million pieces of KFC chicken meals every single year and always try to ensure the highest quality standards at every restaurant. However because all of our KFC chicken on the bone is freshly prepared by hand, on extremely rare occasions, human error can mean that a kidney, not a brain as claimed, is not removed in the preparation process.” The spokesman continued, “We have reminded staff to pay extra attention when preparing our chicken to ensure this does not happen again.”