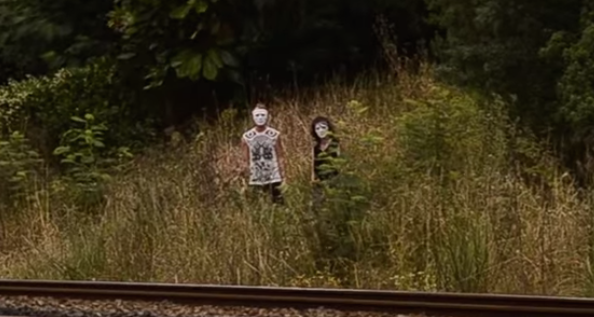 Police Are Looking For These 2 Creepy Masked Figures That Appeared In The Woods.

I’m sure anybody’s natural reaction would be to run!

A group of teenagers were filming a skit for a school project in the wooded areas of Auckland, New Zealand when they notice a strange pair walking through the forest.

They were wearing some very creepy, strange masks.

As the two got closer, the group of kids could see that they were both armed.

The two continued to stalk the group of kids. Whether it was a sick joke or a real couple of psychos, is still unclear.

The police are currently on the hunt to find out who these masked maniacs might be.

They are warning people in the area to be on the lookout and to not approach the two, as they are armed and considered dangerous.

Police are urging people on social media to share this photo and video.