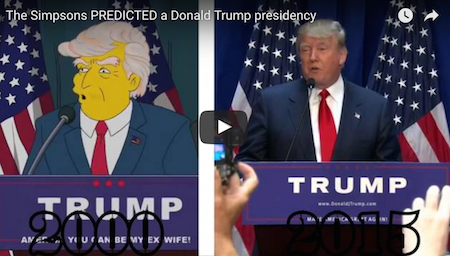 I came across this video and I have to say I’m pretty mind blown.

I had to watch it a few times, because I could not believe the identical movements as well as the people’s behavior in the background of the cartoon and the actual video of Donald Trump in 2015.

For instance, when you watch the cartoon keep your eye on the man holding the sign that says “vote” at the top of the railing. You will see the sign drops to the ground.

When you watch the actual video of Donald Trump coming down the escalator, look in the same location of the railing and you will see a sign dropped to the floor.

You will even see that his election signage is the exact same as the Simpsons cartoon in the year 2000. I mean really… did Donald Trump get together with the Simpsons just to screw with us? Or is this just some kind of weird sh*t no one can explain?