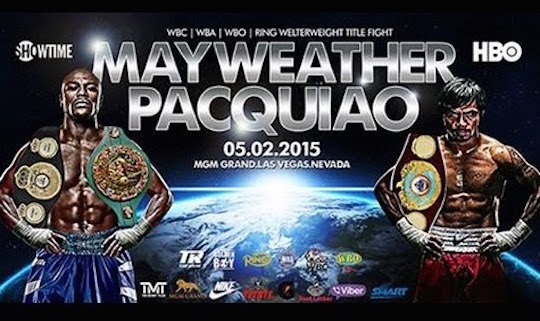 On May 2nd, Floyd Mayweather Jr. is set to fight Manny Pacquiao in the most anticipated boxing event since Mike Tyson’s cameo in the hit movie The Hangover.

Just days after the big announcement from Floyd Mayweather, the Internet is buzzing with predictions, soothsaying, and prognostications.

Undoubtedly with the best fighters currently gracing the ring, it is hard to say who has the upper hand in this contest.

But, for Floyd Mayweather the outcome is clear.  “I am the best.  There is nobody better than me.”

In a brief Q&A session with reporters, he tells us why he will absolutely win:

Reporter – “But God made all of us, including Manny.  So isn’t he special, too?”

Mayweather – “There is a guy name Pale Leo who made this caveman diet.  You’ve all seen the Flintstones.  Those guys wrestled dinosaurs.  Imagine how strong I’ll be after a few weeks.”

Mayweather – “Without me what is boxing?  I’m the cow of cash.”

Mayweather – “No, I mean I got enough cash to stuff a cow.  You got to be good to earn that much cash.”