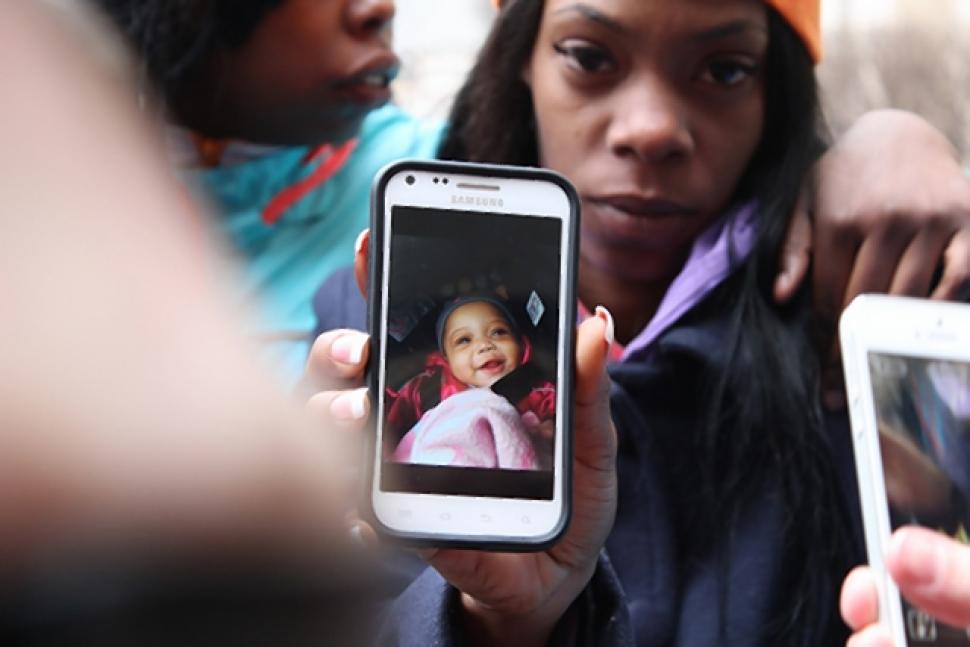 A Chicago family is mourning the tragic death of a six-month-old girl was shot multiple times as her father changed her diaper on Monday.

Johnylah Watkins passed away on Tuesday morning, a day after a gunman opened fire on her father in the Woodland neighborhood on the South Side, Chicago pastor Corey Brooks told NBC Chicago.

“The city of Chicago should be outraged that a six-month-old baby could be shot and killed in our city,” Brooks told the local station. “It’s horrific.”

Johnylah was shot five times, in her thigh, shoulder, lung, liver and bowels. Her father, 28-year-old Jonathon Watkins, remains in serious, but stable condition at Northwestern Medical Hospital. He was hit in the cheek, leg and buttocks as he leaned over to change the infants diaper in his car.

A police source told DNAinfo that Jonathan is a known gang member of Gangster Disciples street gang. Superintendent Garry McCarthy said he is not sure whether Jonathan, who has had an extensive criminal history, will cooperate with authorities.

“He’s in a lot of pain,” McCarthy said, adding that it appears the shooting was gang related that Jonathan was “exclusively” the target.

Authorities are now hunting for the gunman, who reportedly fled the scene in a blue conversion van. McCarthy said they do not have any concrete leads.

Brooks said the child’s mother, Judy Young, is heartbroken. “We are going to find who did this and make sure they are brought to justice,” he told NBC Chicago. “We are not going to be afraid. We are going to take back our neighborhood.”

Brooks, a pastor at New Beginnings Church in Woodland, said the church is offering a $5000 reward for information that leads to the arrest of the shooter. Relatives say this is the second shooting the family has endured. Young was shot several months ago while she was pregnant with Johnylah.