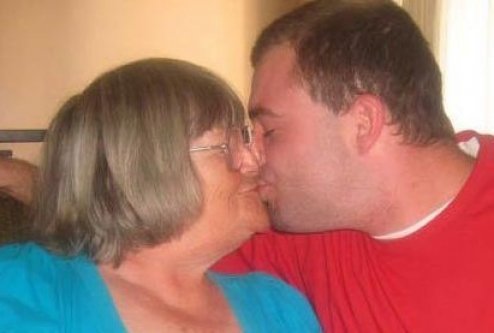 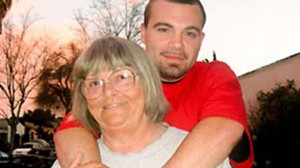 72-Year-Old Granny Having A Baby With Her Grandson. There are some pretty weird and twisted things in the world and this may just happen to be one of the top ones in my book. A grandmother has recently reveled to her friends and family (as well as the entire internet) that she is having a baby with her own grandson. Yeah you heard that right… her grandson!

The 72-year-old grandmother, Pear Carter has begun an incestuous relationship with her 26-year-old grandson Phil Bailey. His mother Lynette Bailey was given up for adoption by Carter when she had her at 18 years of age. When Phil’s mother died he went out to track down his long lost grandmother and they ended up falling in love. Carter has told New Idea magazine that, “From the moment that I saw him, I knew we would never have a grandmother-grandson relationship. For the first time in years I felt sexually alive.” If you didn’t just vomit yet hold on, there’s more. After about two weeks knowing each other she made her move, “I called Phil into my bedroom, sat him on the bed, and then I leant over and kissed him. I expected rejection but instead he kissed me back.” Phil’s feelings were quite mutual saying, “I wanted to kiss her there and then. My feelings were overwhelming. I love Pearl with all my heart. I’ve always been attracted to older women and I think Pearl is gorgeous. Now I’m going to be a dad and I can’t wait.” 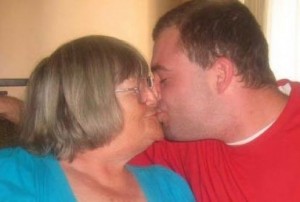 Carter plans on using her pension to pay a surrogate mother so that they can have a child. The surrogate Roxanne Campbell believes that the couple is great. “Initially I was shocked, but they’re a brilliant pair and I saw how much hey loved each other. I know the baby will be loved too.” The two say that, “Yes, we get laughed at and bullied when we go out and kiss in public but we don’t care. You can’t help who you fall for.” Carter believes that God is giving her a second chance at raising a child since she gave her first one up for adoption so long ago. Who’s to say, even though it’s really really really weird and uncomfortable, I guess you just can’t help who you love.