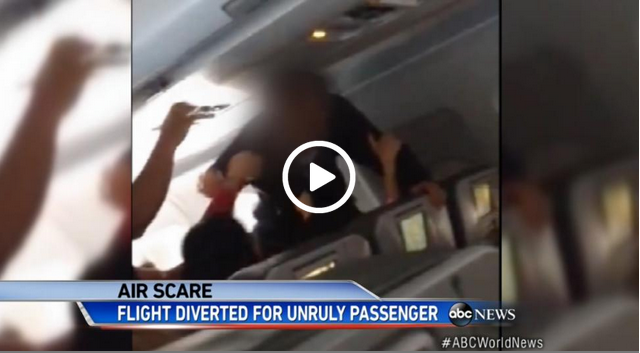 Pilot Makes Emergency Landing Due To Unruly Jetblue Passenger. On Saturday a JetBlue flight from JFK to Las Vegas had to be diverted to a Detroit airport due to an unruly passenger. The outburst began when a passenger standing on his seat started yelling in a foreign language. One of his family members tried holding him back, but he lunged towards a flight attendant who managed to restrain him. You could hear the female next to him screaming, “Dad stop it!”

One of the crew members bound his wrists with plastic handcuffs, but the passenger still continued to kick and scream. He even continued to kick his own daughter. The passenger was taken to the rear of the plane and strapped to an empty row of seats away from the rest of the passengers. The pilot rerouted the flight to Detroit where passengers were left on the tarmac for hours. The JetBlue passenger was taken into custody by the Detroit airport police. They determined he needed medical attention and took him to a nearby hospital. Criminal charges are being considered.