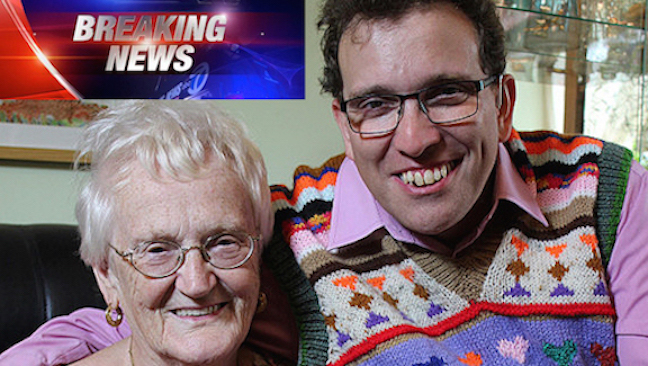 A 76 year old woman has created much controversy last week, by breast-feeding her 42-year-old son in the middle of a KFC restaurant.

But not before he fed on her for nearly 15 minutes.

The unusual episode has sparked strong reactions on social media and provoked a huge debate on the limits of breast-feeding in public places.

Many of people that witnessed the incident say it seemed to be more of a incestuous engagement, rather than a gesture of maternal care.

“What in God’s name was that?” said Ali Belfouz, a patron at the restaurant. “I have nothing against breast-feeding, but that was pure nonsense. You have to be insane to breast-feed your child at that age. They should have been arrested for gross indecency rather than getting kicked out.”

But Mrs. Berrety has a different opinion. “It’s my right as a mother to breast-feed my child,” says Mrs. Berrety. “If people don’t agree with the way I raise my son, that’s their problem. I have raised a great man, beautiful, tall, who still lives in stays with me. I think I’ve done a great job as a mother and don’t appreciate getting insulted and expelled just because I decided to breast-feed my child a little longer than other mothers.”

KFC management said that Mrs. Berrety is no longer welcome in their establishment with her son Michael.