An Internet Meme Made Me Do It! 8 Real Life Crimes Inspired by Not-So-Real Characters. Unless you’ve been living under a rock for the past couple of months, you’re probably familiar with the Slender Man infatuation that has taken the horror fanatic community by storm. 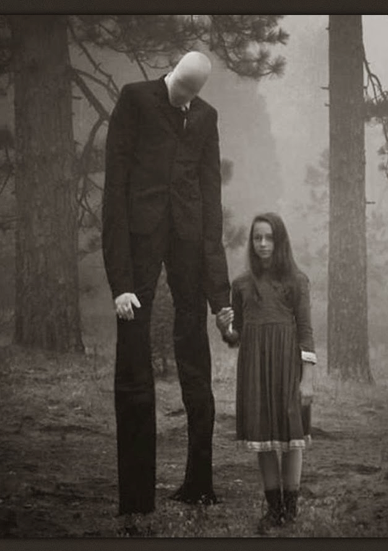 But just in case you haven’t heard, here’s the story: Recently, two teenage girls in Wisconsin repeatedly stabbed their 12-year-old classmate in an effort to impress what is known as “Slender Man”, a popular Internet meme that while creepy-looking, is entirely fictional. One girl was quoted as saying: “Many people do not believe Slender Man is real [and we] wanted to prove the skeptics wrong.” The girls have since been arrested and will be tried as adults. Slender Man, which first appeared on an Internet forum in 2009, was originally created to evoke a general sense of uneasiness and terror. We’d say they definitely nailed it.

The Inspiration: Mickey and Mallory Knox from the film Natural Born Killers

The film Natural Born Killers tells the story of two individuals, Mickey and Mallory, who suffered rough childhoods. The two fall in love and become “psychopathic serial murderers irresponsibly glorified by the mass media.” The film, which featured an all-star cast including Robert Downey, Jr. (Ironman), allegedly inspired many violent crimes, including the Columbine High School shooting that took place five years after the film’s release. According to investigations, both shooters (Eric Harris and Dylan Klebold) in the Columbine disaster were fans of the Oliver Stone classic, and they often used the initials ‘NBK’ as their “special code.”

The film also inspired Sarah Edmonson and Benjamin James Darras to shoot two people in 1995. The couple reportedly took LSD, watched the film and then made the not-so-smart choice to embark on a shooting spree. They managed to kill one person and injure another before being apprehended by police. Darras is currently serving a life sentence while Edmondson received 30 years and is free on parole. 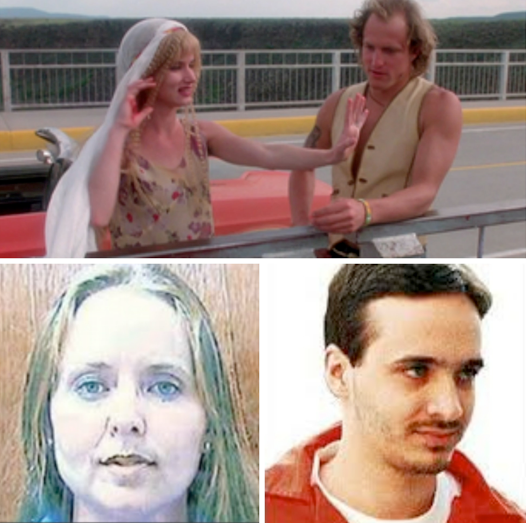 The Inspiration: “Ghost Face” from the film Scream

The Scream series, which debuted in 1996, featured a character in a black hooded robe and a mask, which is now referred to simply as the “Scream mask.”  In the film, the masked murderer only had one M.O.: stabbing his victims to death. In 2001, 24-year-old Thierry Jaradin had the not-so-hot idea of recreating the smash-hit and stabbed his teenage neighbor 30 times…while wearing the scream mask and robe. He then put her bloody corpse in his bed, put a single rose in her hand, and called his father to confess. Jaradin is now serving life in prison.

The Inspiration: Edward Cullen from the Twilight Saga

While some may find the Twilight films annoying or painful to watch, for one teen in Iowa, the films were an inspiration. A 13-year-old boy in Des Moines was embracing his inner vampire when, over a on-month period, he bit 11 classmates. The boy’s father claimed his son hadn’t meant to cause any harm, he was only biting people because of the popular vampire teen movie franchise made him do it. The kid was later admitted to juvenile corrections.

The Inspiration: “The Joker” from the film The Dark Knight Rises

Remember the movie theater tragedy in Aurora, Colo., a couple years back? A man named James Holmes entered a screening of The Dark Knight Rises, dropped a smoke grenade, and waited for it to take effect before opening fire on the movie-goers. In all, 12 were killed and 58 were injured. Upon arrest, he told authorities, “I am the Joker.” Scary.

The Inspiration: Tyler Durden (aka Brad Pitt) from the movie Fight Club

I know…I’m breaking the first rule of Fight Club, but bear with me. The movie features a scene in which bombs explode inside businesses that the club considers to be symbolic of their oppression. Over Memorial Day Weekend in 2009, a number of homemade bombs went off in buildings all over New York City – including a Starbucks (shocking). 17-year-old Kyle Shaw, who the bombings were later linked to, was a member of a local “fight club.” He even went as far as bragging to his peers about planting the bombs, which ultimately lead to his arrest. Though there were a number of copycat crimes linked to this movie, this one certainly takes the cake.

The Crime: Conspiring to kidnap and torture

The Inspiration: The Jigsaw Killer from the film Saw

The Jigsaw Killer coming to life is enough to make anyone shudder – one Salt Lake City mother’s worst nightmare almost came true. After overhearing a conversation between her 15-year-old son and his friend, 14, plotting to torture and murder a laundry list of people, she alerted authorities immediately. In true Jigsaw fashion, the boys were in the process of setting up elaborate games and mazes to test their victims. But don’t worry…their intentions were good. They were only going to target people they claimed were harming others in an attempt to stop the wrongdoing. Sure thing, boys.

The Inspiration: Neo from The Matrix

The Matrix is yet another film with a number of copycat killers. In Virginia back in 2003, Josh Cooke, 19, shot and killed his parents while cloaked in a Keanu Reeves-style trench coat. He claimed “The Matrix Defense.” Cooke says that he legitimately believed he was living in the Matrix. Guess he should have taken the blue pill.

Neo from The Matrix. Photo courtesy of Nadir Hashmi.

The Inspiration: The TV Show Dexter

You can’t say you didn’t see this coming. 17-year-old Anthony Conley aspired to be like the title character of the popular drama who only kills bad people. Only Conley got it all wrong. Instead of killing someone who has caused harm to other people, he instead killed his younger brother, his own flesh and blood, and then blamed it on the TV show. And before your thoughts go haywire, no, his brother was not a bad person. There was no justice served from Conley’s actions. He simply created more havoc.

It’s all fun and games until someone gets hurt. The creators of these movies and characters obviously did not intend for actual humans to lose their actual lives, but that just goes to show that you should err on the side of caution. Let’s just leave the killing and blood-sucking to the people who do it best – Hollywood fictional villains.