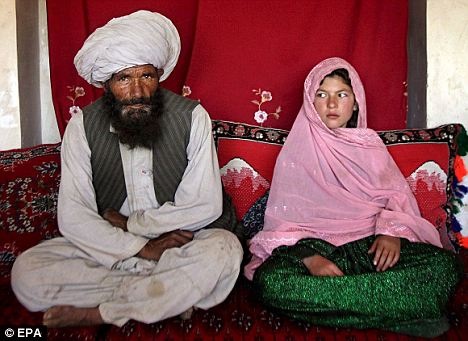 An 8 year old child bride dies from internal hemorrhaging on her wedding night.  She was married off to a 40 year old man. As disgusting as this is, it happens all the time as it is a common practice in Yemen. More than 25% of the young female population are married before the age of 15.

4 years ago a 12 year old child died from complications as she labored her unborn child for 3 days. Many, many other children have suffered the same tragedy as their young bodies are forced into adulthood by older men.

Recently, after international condemnation of these practices and campaigns by charities such as UNICEF and Equality Now, the countries government finally appears ready to put an end to this tradition.

The Director General for Yemen Ministry of Human Rights stated that the Minister for Legal Affairs is to submit a bill that will outlaw these marriages of young girls. Police stepped in and stopped a marriage of a 9 year old girl last week, which shows hope that this law will pass and things are about to change for these young girls.

Please pass on this article to help raise awareness of this sick tradition. Hopefully enough organizations will ban together to get this Law passes and protect these young girls from enslavement.