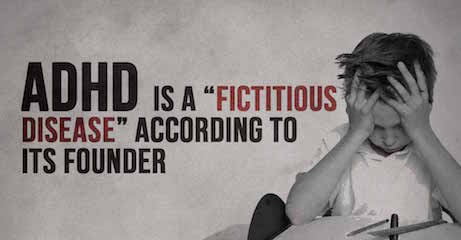 In his last interview before his death, the scientific father of ADHD – Leon Eisenberg, said: “ADHD is a prime example of a fictitious disease.”

According to Psychiatric News, Eisenberg received the “Ruane Prize for Child and Adolescent Psychiatry Research. He has been a leader in child psychiatry for more than 40 years through his work with pharmacological trials, research, teaching, and social policy and for his theories of autism and social medicine.” So, why in the end would a man discredit his own body of work after so many years? Guilty conscious?

6.4 million children a year are diagnosed with ADHD. But why? Jerome Kagan, a psychologist at Harvard and leading expert in childhood development, says: “Let’s go back 50 years. We have a seven-year-old child who was bored in school and disrupts class. Back then, he was called lazy. Today, he is said to suffer from ADHD (Attention Deficit Hyperactivity Disorder). Every child who is not doing well in school is sent to see a pediatrician, and their pediatrician says: ‘It’s ADHD; here’s Ritalin.’ In fact, 90% of these 6.4 million kids don’t have an abnormal dopamine metabolism. The problem is, if the drug is available to doctors, they’ll make the corresponding diagnosis.”

This is an interesting take on a condition that 1 in 10 American boys takes medication for daily. Dr. Lisa Cosgrove published a study entitled “Financial ties between DSM-IV (Diagnostic and Statistical Manual of Mental Disorders) Panel Members and the Pharmaceutical Industry.” The DSM is the set of guidelines that doctors used to diagnose mental conditions and how to treat them. Does it surprise anyone that the study found that “of the 170 DSM panel members 95 (56%) had one or more financial associations with companies in the pharmaceutical industry. 100% of the members of the panels on mood disorders and schizophrenia and other psychotic disorders had financial ties to drug companies.”

With Eisenberg’s own words and the ties between the people that define what ADHD is and how to treat it to pharmaceutical companies, the diagnosis of ADHD in children these days makes no sense to me. Kids are going to be kids, that doesn’t require them to take a pill. Sure, there are some legitimate cases of ADHD but, for the most part, it seems like a classic case of under diagnosis and over medication. There are people out there, doctors actually, were making a living off of feeding drugs to kids.

I am pointing these facts out to open your eyes to the idea that just because your doctor says something is wrong with your child, doesn’t mean that there is. I’m also not trying to say that all doctors are bad and are just trying to make money from pushing pills. What I am saying is that the diagnosis of ADHD has become so common that people rarely bat an eyelash at it, and maybe it’s time we start bringing it into question. ~ iHeartIntelligence