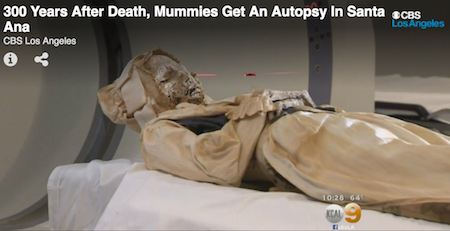 In 1994 archaeologists discovered perfectly preserved caskets underneath the church in Hungry. Two mummified bodies belonged to a 38-year-old mother named Veronica and her one-year-old son, Yohan, both who likely died of tuberculosis.

Recently, the mummies were wheeled inside the Orange County Global Medical Center in Santa Ana, California, 6000 miles from where they were discovered. Now, doctors are set to perform belated autopsies in an effort to uncover vital information from the grave. But Veronica and Yohan weren’t the only bodies found beneath the church; more than 250 mummies were discovered in the same underground crypt.

Experts are well aware of the fact there were no antibiotics or medications 300 years ago. But that isn’t keeping them from searching for more answers. How did they live their lives? Exactly why did so many children died during this time? Using the first-ever virtual autopsy on mummies, doctors hope to resolve the secrets this mother and son took to their graves.

The results of the CT scan will be revealed at the Bowers Museum during the “mummies of the world” exhibition that runs through September 2016.