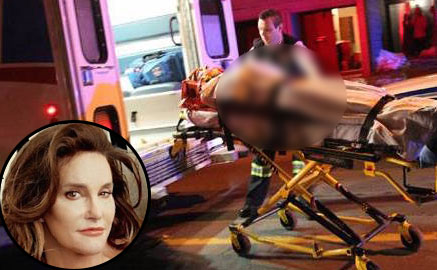 Crimes of hate and prejudice are nothing new here in the United States. The sad fact is that gay and transgender people have become the number one target in these attacks.

But with the amount of attention Bruce Jenner’s new “look” is getting all over the media, it was only a matter of time that this type of violence would happen.

On Wednesday at 1:42 a.m., police say “Caitlyn” was leaving her Beverly Hills condominium when she was attacked by four men who slammed her to the ground.

According to the victim’s statement, the attackers took turns punching her in the chest as hard as they could, rupturing both of her newly received a breast implants.

Surveillance footage, which has not yet been released, shows a Hispanic male, and African-American male, and a Caucasian male grabbing Jenner and dragging her into an alleyway.

After the attack, Jenner crawled about 50 feet yelling for help. That’s when a passerby saw the badly beaten woman and dialed 911.

Jenner was rushed to Cedars-Sinai Medical Center where the remaining pieces of her breast implants were removed and she was treated for cuts, bruises and a concussion.

The Beverly Hills Police Department, and cooperation with the Jenner family, is offering a $100,000 award for the arrest and conviction of the men who attacked her.