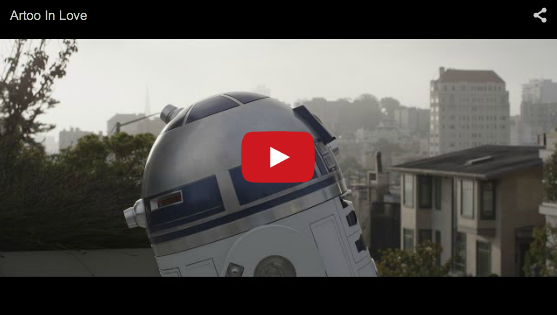 This one is for all you Star Wars fans, I mean who doesn’t like R2-D2. A new short film titled “Artoo in Love” follows our favorite droid as he attempts to find love throughout the cities of San Francisco and Berkeley. In the film it seems R2 finds the love he’s been searching for but is then rivaled by another unit.

“Artoo in Love” recently made it’s debut at the Sonoma Film Festival over the weekend and was written and directed by Evan Atherton who is an Autodesk engineer who works on “experimenting with new technologies as they relate to digital design.”

Even with no dialogue there’s no doubt that the film creates an emotional state for the viewers. “People have definitely been having real emotional reactions to it,” Atherton told Mashable. “I think that stems from what always made Artoo special: He was more than just a machine. So seeing that play out, and seeing Artoo really sad, tugs on some childhood heartstrings.”

Atherton spent about two years working on the film and used a 3-D printer at Autodesk’s San Francisco offices to make parts for the pink R2 unit at the end of the film. Let me just say, I think R2-D2 really traded up at the end. Check it out below: