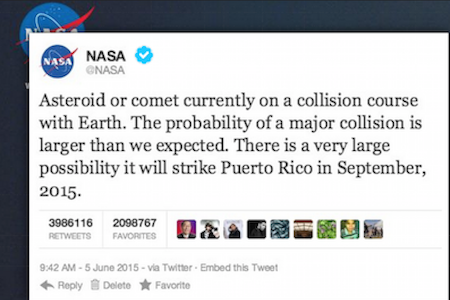 both NASA and the Federal Emergency Management Agency (FEMA) have been preparing for a global catastrophe.

NASA has launched its ‘Hypothetical Asteroid Impact Scenario’, while FEMA has begun stockpiling on emergency supplies.

Is an asteroid Armageddon just around the corner?

NASA finally put their denial behind them, confirming on Twitter last month that the scenario is real:

“Asteroid or comet currently on a collision course with Earth. The probability of a major collision is larger than we expected,” reported NASA on their Twitter page in early June. “There is a very large possibility it will strike Puerto Rico in September, 2015.”