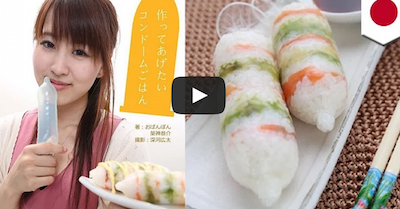 Yes, you read that right. A new Japanese cookbook released recently puts a whole new (sexy?) spin on dining with your significant other.

The cookbook, roughly translated, is titled Condom Meals I Want to Make for You.

It lays out 11 recipes that you can make using the contraceptive, including condom sushi and even condom meat stuffing.