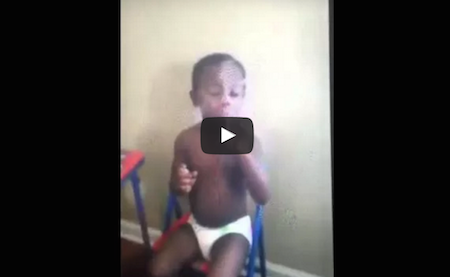 Chicago police are investigating a video posted to Facebook that appears to show a toddler smoking a marijuana joint as a man offscreen encourages the boy to “inhale it.”

A community activist tipped cops to the clip, and special victims unit detectives are now trying to identify who filmed the video, according to a Chicago Police Department spokesperson.

It is unknown when or where the video, which was posted to the Facebook page of a Chicago resident, was recorded. Seen below, the 17 second clip found on Facebook shows the video playing on the screen of a cell phone, but it includes markings indicating that it may have previously been uploaded to some video sharing site.

In the clip, a man’s voice is heard directing the toddler to “Smoke, bro. Inhale it.” The man, who appears to be filming the boy with his cell phone, then says, “Let me hit that, okay?”

If investigators succeed in identifying the suspect, he will face a sort of charges, including child endangerment.