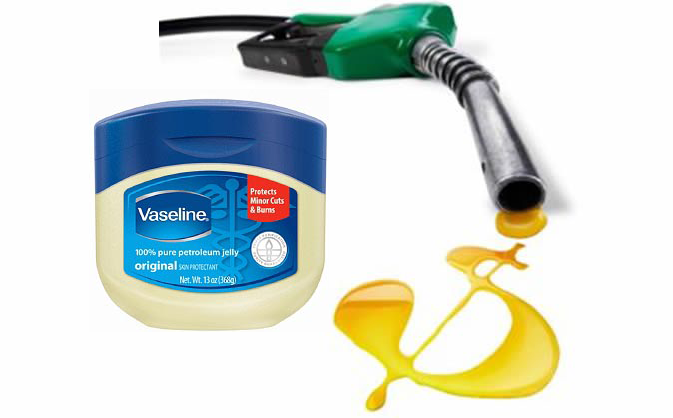 Critics Upset As Price of Gasoline Falls, Yet Price of Vaseline Stays the Same.

Thanks to nearly 60% drop in Oil Prices, consumers today are enjoying the lowest price in gasoline since 2009.  Natural Gas and travel costs are either dropping, or reporting price reductions in the upcoming weeks.  However, not everyone is enjoying the same reliefs.

“I can’t believe it!  I can’t believe it!” bellow Judy Jetsam, Mother and Acquisition Manager for the Jetsam Family.  “I can fill up my piece of junk car for under $2, but a tub of Petroleum Jelly still costs $5.99 at Walgreens.  What is the world coming to?”

First discovered/invented in 1872, Vaseline is made from waxy petroleum, a by-product of oil.  The waxy materials is distilled and filtered until only the petroleum jelly is left.  Since it’s discovery, petroleum jelly has been used in cosmetics, lotions and salves.

“It’s a wonder why the WWE, Pro-bodybuilders, and Dwayne Johnson are not more up-in-arms over the consistent pricing structure of petroleum jelly makers,” argues Dr. Rex Reade, a random Dermatologist found in the Yellow Pages.  “They douse themselves daily in enough jelly to care for one baby for a year.”

Dr. Reade believes Vaseline and other makers of petroleum jelly are just looking to make a profit.  “In this day and age, for a company to try to profit from their own labors is just insanity.”

“Vaseline ain’t the only ones still charging.  Those generics and store-brand are still charging too,” Mrs. Jetsam continued to rant.  “I mean it makes those Gas Companies look almost saintly.”

When asked why Mrs. Jetsam was purchasing thirteen jars of jelly, she replied, “Mind your own business!”

Unfortunately for Mrs. Jetsam, Dr. Reade, and most beauty pageant contestants, the concerns over the pricing of Petroleum Jelly are widely ignored.  From a polling of approximately zero people, the concerns of Vaseline prices weighed far below “What am I having for dinner tonight?” and “Is that car heading straight at me going to swerve?”