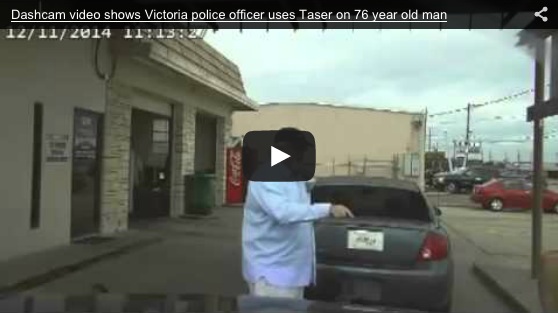 A few weeks ago, a video emerged on the internet that showed a Texas police officer, 23-year-old Nathanial Robinson, using what has been determined as excessive force on a 76-year-old man.
Dashcam Footage of Police Tasing 76-Year-Old Man. The officer’s dashcam footage shows him pulling over Pete Vasquez for having an inspection sticker that Robinson may not have understood.

After getting out of the vehicle, Vasquez walks to the back of the car and points out his dealer plates as well as the building where he works.

Robinson attempts to take a piece of paper out of his hand and when he doesn’t grab it, he goes to detain Vasquez. This turns into a struggle as both men end up on the ground.
The next time we see Robinson he is holding his taser, which he uses on the 76-year-old two times.

Larry Urich, who is a sales manager for the dealership, said, “I told the officer, ‘What in the hell are you doing?’ This gentleman is 76 years old, The cop told me to stand back, but I didn’t shut up. I told him he was a [expletive] Nazi Stormtrooper.”

The officer has since been fired from the department after being put on administrative leave. Robinson’s lawyer, however, says that his client’s use of force wasn’t unreasonable in the circumstance and he plans to fight to get Robinson his job back.

Check out the video below. What do you think? Was Robinson’s use of force excessive or did this case just come at a bad time in our country when cops are being watched more than ever? Share this post and let us know what you think.