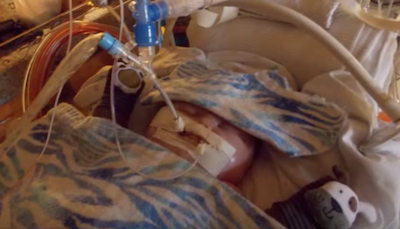 Their anticipation of the birth of their third child went from joy to devastation when they were told not only did the baby have down syndrome, but also a medical condition known as hydrops.

Hydrops is a condition which causes the body to swell with fluids.

The doctors told the parents, Karen and Brian Wollman to expect a stillborn baby. But they refused to give up hope. Every day while he was in her womb, Karen softly sang “This Little Light of Mine” to baby Renner.

When the day came for Renner’s birth, he was born breathing which was an absolute miracle to everyone. Renner was born via emergency C-section at just 35 weeks.

The baby was put on oxygen and the parents were asked if they had any last wishes for their baby, who was only expected to live for just a few days.

But the true miracle really occurred when Karen asked the nurses to bring her a rocking chair so she could rock her baby for the first and possibly last time. Little did she know what would happen next.