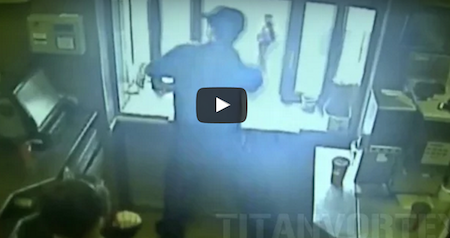 Oh hell no… Not the donut holes!  A video from Tim Horton’s shows an employee throwing scalding hot coffee on a customer.

The angry employee then waits for the customer to go back to the drive-through window and throws more coffee at him – this time a cold cup of coffee was thrown back by the customer.

The customer said he contacted Tim Thorton’s about the incident but has not received a response. He is now responding with an attorney. “It’s a felonious assault. He threw hot coffee, it struck him in the face. Not happy about it. No one should have coffee thrown in their face,” said attorney Majed Moughni, who is representing the customer.

The customer said he asked the female employee to toss out his old cup of Tim Horton’s coffee which he had in his car. She refused to do that and from there things got heated. The video shows her hand him the fresh cup of coffee but he refused it. As the customer drove away, a 19-year-old male employees started throwing hot coffee.

The irate employee is shown screaming through the drive-through window. That’s when, according to the customer, the employees started screaming racial slurs. The customer did throw back a cup of cold coffee at the employee. He also appears in the video to spit on the employees.

Tim Thorton’s released this statement on the incident: “Guest safety is of paramount concern to Tim Thorton’s. We were aware of the incident and the franchisee has taken the appropriate steps to address the matter.”