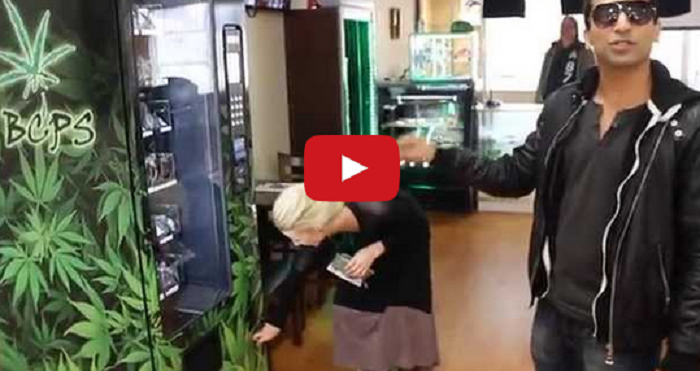 First Marijuana Vending Machine That Doesn’t ID You- $50 For Half Ounce.

According to WorldTruth.tv, the first cannabis dispensing machine in Canada has begun operating in Vancouver, following the first machine installed recently in Colorado.

What’s the difference? The Canadian machine does not ID you.

Despite the controversy surrounding the plant and the endless bickering that has marked the discourse around it, the machine looks strangely ordinary and even less threatening than a cigarette pack, with big green leaves and certainly no indication that it contains something that is so hotly debated.

“We put it in the vending machine to cut down on theft and handling,” says Chuck Varabioff, of The BC Pain Society, the place where the vending machine was installed. “It’s packaged up and sealed professionally. So you come in, you buy your product, it’s fresh, it’s quick and easy, and you’re out of here in minutes.”

The box contains a whole host of strains and flavors that are sure to keep people smiling and pain free.

The product is sold in quantities slightly bigger than an eighth of an ounce (3.7 grams) and the machine only accepts cash.

The one key difference that really sets the machine apart from the one in Colorado is that it does not ask for your ID, purchasing is anonymous.