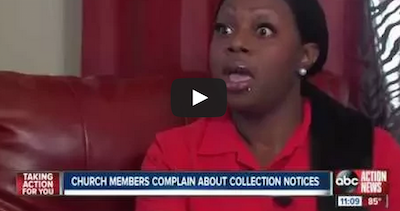 A Florida woman is upset with her new church after they sent her a delinquency notice reminding her that worshipers were expected to pay $1,000 in fees or face possible removal.

She enjoyed the services and everything seemed to be going well until – she received a troubling letter.

Candace, a single mother, says the letter from her church asked her to contribute $50 per month, a yearly $250 anniversary fee and another $150 fee for Mount Moriah Day. These fees accumulate to $1000 and if she doesn’t pay, she will not remain in good standing or be able to vote on church matters.

What frustrates Petterson the most, is that these fees are being requested to pay off church debt.

“What church charges you to help pay off what they’re going through?” She said. “I’m not there for that.”

To add insult to injury, the letter also reminded Petterson that children – including her 11-year-old daughter – were expected to pay $5 a month to the church in addition to two annual fees of $15.

“In order to not be removed from the church role, your attention to this matter is greatly appreciated,” the letter warned but offered to grant her a 90 day hardship exemption.

Petterson says she would rather find a new place of worship, but she worries others might be taken advantage of by this congregation’s excessive membership fees.