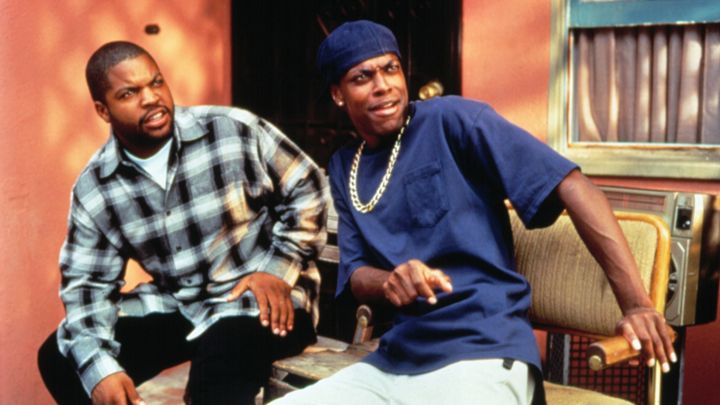 ‘Friday’ Headed Back To Theaters For 20th Anniversary Screenings on 4/20/15.

“For the theaters, for New Line Cinema, for the fans who want to pay homage to the movie in this way is cool,” Ice Cube, the film star and cowriter, told Buzzfeed News. “It lets you know how much people appreciate it and how much fun it is. And it lets you know that ‘Friday’ is now a part of the American fabric.”

The one night only event will feature a special director’s cut of ‘Friday’, along with “Friday Straight Up,” a 24 minute featurette including behind-the-scenes set footage and cast interviews.

On April 14, in connection with the screening, the film’s double platinum soundtrack will be reissued on vinyl. The LP, which topped the US charts for two weeks in 1995, includes a mixture of vintage R&B and 90s hip-hop ( like “Keep Their Heads Ringin’,” Ice Cube’s collaborative hit with Dr. Dre ).

“I remember picking these songs and thinking, ‘No ones used ‘Mary Jane’ by Rick James in a movie? This is going to be perfect,” the actor – rapper told Buzzfeed. “You usually don’t get the Isley Brothers and a fresh Dr. Dre song. It was a really special labor of love.”

The original ‘Friday’ co-starred Ice Cube and Chris Tucker as to friends toking up, battling drug dealers and searching for employment in urban Los Angeles.

Ice Cube wrote and starred in two sequels, 2000’s ‘Next Friday’ and 2002’s ‘Friday After Next’, but the original remains the true fan favorite.

A fourth installment in the series has been rumored for years – but in a 2014 Reddit AMA promoting the Kevin Hart’s buddy comedy ‘Ride Along’, Ice Cube said the project had been stalled by the studio. “The next ‘Friday’ movie is caught up in development hell at New Line Cinema,” he wrote. “Pray that we get it outta there.”