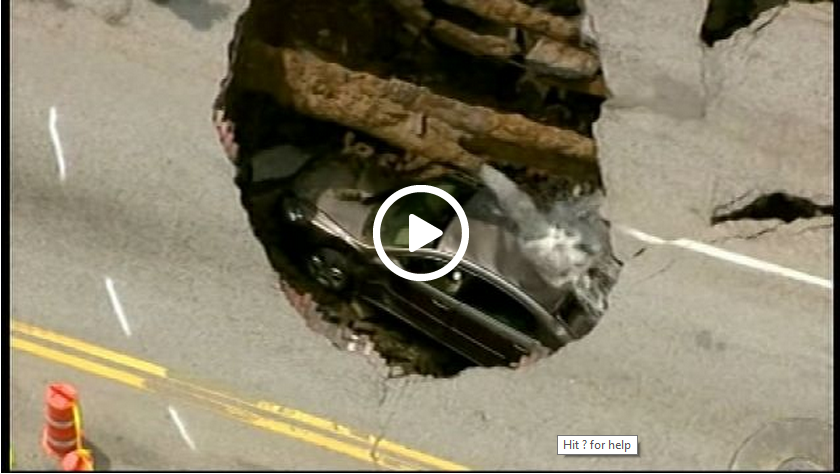 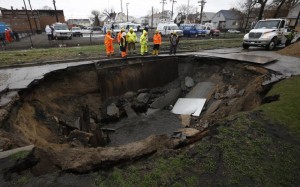 Gigantic Toledo Sinkhole Swallows Car! The woman who was taken to a hospital after her car was swallowed by a sinkhole in central Toledo has been identified as Pamela Knox. Knox, 60, of Toledo, was taken to Toledo Hospital to be checked out. However, she did not appear to be injured. Police said Ms Knox was driving southbound on North Detroit Avenue when her car fell into a large sinkhole near Bancroft Street.

Ms Knox reportedly was able to climb out of the hole herself with the help of a ladder after being trapped for several minutes. The sinkhole was reported at 12:15 p.m.. The cause of the sinkhole was a collapse of combined sanitary and storm sewers. Officials estimate the whole is deeper than 10 feet. All surrounding roads are closed. Mayor Mike Bell responded to the scene by saying, “I’m just happy that, as I understand, she walked herself out of the hole. We had a lot of rain lately and something must have washed out under the road.” 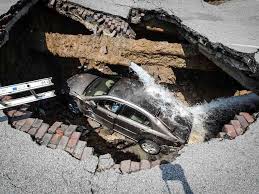 He said the woman was not hurt, just shaken up. It was not immediately clear whether she was transported for observation. “She saw the car in front of her starting to go into the whole, and it managed to drive on, but she could not”, Sergeant Heffermen said. They were lucky the incident happened earlier in the day, before traffic became heavy. It will take city crews about 4 to 5 days to repair the road.