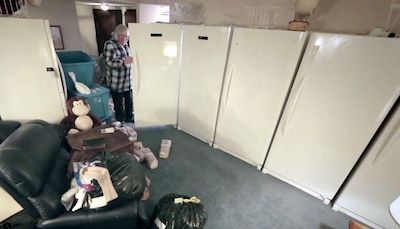 He Keeps 17 Freezers In His Living Room, But It’s What’s Inside That Shocked Everyone!

When Allan Law was 11 or 12 years old, he found his true calling.

He believed that he was born for the sole purpose of helping others.

Today, he’s known to locals in Minneapolis, Minnesota, as the “Sandwich Man” because he spends his nights on the streets of Minneapolis delivering goods to those in need.

After working as a teacher for 16 years, Allan chose to retire and soon after began driving a minivan around town. His minivan is adorned with the number 363, which represents the number of days in the year that people don’t think about the homeless.

Allan is on a personal mission to change that, and using 17 freezers and his living room to store his sandwiches, he’s well on his way.