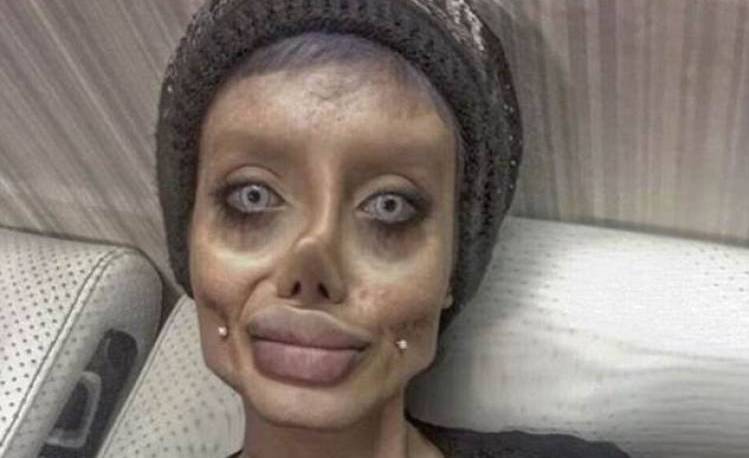 This story is about Sahar Tabar. She is a 22-year old girl from the capital city of Iran, Tehran. Her biggest goal in life was to become an Angelina Jolie lookalike, which she now claims to have finally achieved. Some people love her look, while others post negative feedback on her social media accounts, calling her a “zombie,” and a “walking corpse.” According to some experts, she has undergone 50 surgeries to achieve this look, while others claim she is only using clever makeup and prosthetics.

Sahar Tabar is a 22-year old girl from Tehran, Iran. According to her own words, she was desperate to look like Angelina Jolie, which is why she underwent over 50 different surgeries in order to attain the “ultimate look” according to Sahar.

Her Style Is Controversial

If you look at these pictures of Sahar, no you will undoubtedly know that her style can be controversial. According to Belgian media, she achieved this look by going “under the knife,” although there is a rumor that she is only wearing some clever makeup to achieve the look.

Comparing Sahar to the real Angelia Jolie will leave many people wondering whether she was really trying to imitate Jolie’s look, or whether she is just “trolling” the general public by looking like a zombie straight out of a movie.

Some of Sahar’s followers don’t believe that the young girl has done any kind of plastic surgery, and all that she is doing is wearing a lot of makeup and some clever prosthetics in order to become a viral sensation and get the media spotlight on her.

The first images of Sahar Tabar’s transformation appeared on her Instagram profile. Once she posted a few pictured, people quickly started sharing her photos, and she is now looking forward to gaining hundreds of thousands of new followers.

Although Sahar has only recently debuted on social media, she has already gained over 320,000 followers. This means that in the next few days it is entirely possible that she is going to pass the 1 million Instagram followers mark.

Not All Feedback is Positive

Given the number of followers Sahar has, it is understandable that not all the feedback and comments she is receiving are positive. In fact, many people on social media have called her a “zombie,” and in a few cases a “corpse.”

Has She Achieved Her Goal in Life?

According to Belgian website “Sud Info,” looking like Angelina Jolie was Sahar’s goal in life. Whether she achieved this is debatable, but if she is happy with her current look, why should other people judge her on her happiness?

Is She a Troll?

Given that Sahar is rumored to “still be trying to perfect her imitation of Angelina Jolie,” one has to wonder whether she is actually a masterful troll who has brought media attention to herself from media across the whole world.

According to a few skeptical experts, there is no way Sahar underwent any kind of plastic surgeries, as there are different types of prosthetics that can be purchased online to change how a person looks (for a temporary period).

Here is how the 22-year old girl from Iran looked like before the alleged surgeries. Obviously, she is looking far more normal here, and no one could, in fact, guess that this young girl would ever transformer herself into her current style.

It is amazing to think that Sahar’s complete body and facial transformation took only a few months to be fully complete. That shows how dedicated and obsessive she has been about the whole process. Hopefully, she is now happy with her current style.

Playing In the Woods

Here is a photo of Iran’s Angelina Jolie playing in the woods. You have to wonder how she still has the upper body strength to lift herself up, after losing so much weight (including muscle mass). In any case, it is good to enough she is healthy enough to go outside.

She Had a Procedure Done on Her Nose

No part of Sahar’s face has been left unchanged. You can see in this photo how her skin has been tightened, her nose has been lifted, alongside the changed done to her eyes, lips, hair, and eyebrows. Is any part of her real anymore?