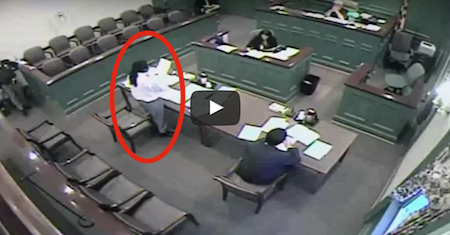 A former Maryland judge who ordered the defendant to be physically tasered in his courtroom was sentenced Thursday to participate in anger management classes and pay a $5000 fine.

On Nalley’s order, the Charles County Sheriff’s Department officer pushed a button that administered an electric shock to Delvon King, 25, who is not a lawyer, but represented himself against gun charges.

After he was shocked, the defendant fell to the ground screaming. A video of the exchange without sound and separate audio was played in court Thursday.

Prosecutor Kristi O’Malley noted that the defendant didn’t raise his voice or yell during the exchange and even called the judge “Sir.”

As ‘Rage of the Machine’ put it so well… “Some of those that work forces, are the same that burn crosses”