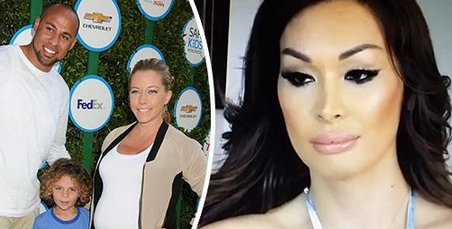 Kendra Wilkinson And Hank Baskett Tranny Cheating Scandal. Hank Baskett’s cheating allegations on wife Kendra have intensified after his tranny lover stepped forward with her side of the story. Ava Sabrina London opens up to the media and Kendra is so upset she caused physical damage to her house and flushed her wedding ring down the toilet. Can you blame her though? It’s one thing to find your husband is cheating, but to find out the girl he cheated with was really a man…. Scandalous! Baskett, 31, allegedly had an affair with a tranny YouTube star Ava Sabrina London in April when Kendra was just eight months pregnant with the couple’s second child. Reportedly, Kendra initially laughed off the reports thinking that they were ridiculous. However, she became increasingly suspicious when Hank did not publicly denied London’s claim. Kandra started snooping and found what she was hoping she would not find. There were unexplained charges on Hank’s credit card statement. Kandra flipped out and punched walls in their Calabasas, California home, threw their wedding photos in the pool, and even pulled off her wedding ring and flushed it down the toilet. 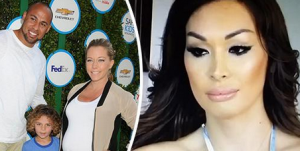 There were reports that the couple would be headed for the divorce court and were currently not speaking. However, sources very close to the couple say that they are still together. According to TMZ Kendra was seen out in Hollywood but she was silent about her marriage to Hank. They were also told that Kendra still has her wedding ring, but she rarely wears it. Hank is currently living in the family home with Kendra and has been there for more than four days after a mysterious absence of 2 to 3 days. TMZ was told the couple is working through issues involving allegations, but they have not split.