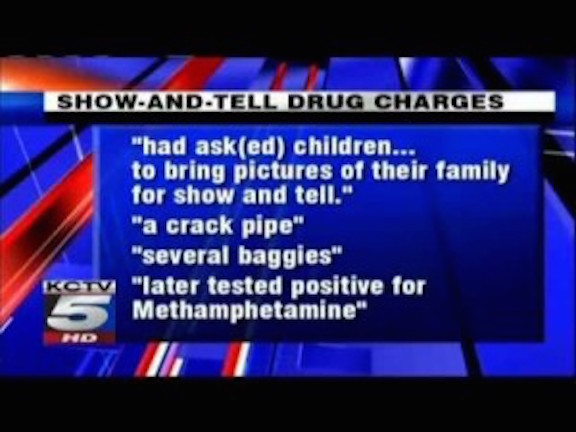 The task for this sweet little kindergartner student was to bring important family items for show and tell. But one kindergardener floored his teacher and local law enforcement officers when police say he pulled out his mom’s crack pipe and one ounce of drugs from his backpack.

The child’s mother was charged with possession of a controlled substance and one count of first-degree child endangerment. The bond was set at $7,500 for the 32-year-old Michelle Marie Cheatham. A family friend at Cheatham home told reporters that the boy is now being cared for by loved ones.

Sweet Springs Elementary School officials contacted the police around 8:30 a.m.. Superintendent Donna Wright told police that students had been asked to bring pictures of their family for show and tell, according to the court documents.

The teacher told police that the boy brought for his show and tell family items, the pipe and several baggies of crack rock. The rocks tested positive for methamphetamine. All together the drugs totaled about 1 ounce and we’re worth about $3,700.

A search warrant was issued at Cheatham’s home and a police dog named “Boomer” found a crack pipe, according to court records. Charges were filed immediately.

Police Chief Richard Downing told reporters that a child bringing drugs to show and tell was a first for his law enforcement career. When I call the prosecutor about it, they said “You’re kidding me aren’t you?” The circumstances of the arrest have astonished neighbors.

“That kind of makes you wonder why parents would leave something like that out for a child to get a hold of,” one resident said.

A source close to the investigation said the mother’s life began spiraling out of control after her husband died earlier this year in a car crash and she received a large military pension. Cheatham posted bail, official said. She is now in the hospital after experiencing complications from a previous gastrointestinal surgery, the family friend said.

Principal Kerns issued a statement to the parents. Kern said the drugs were discovered when the child was unpacking his backpack in the hallway. “These items were never brought into the classroom”, Kern said. “To the best of our knowledge the students never came in contact with the substance”. Kern said parents were notified about the incident because of the pending investigation.