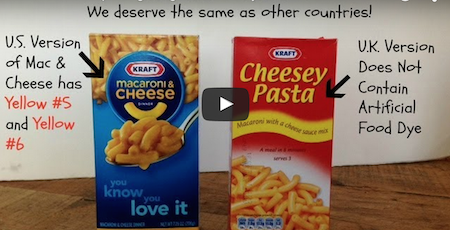 242,000 cases ( 6.5 million boxes ) of macaroni and cheese are being pulled off the shelves because they may contain metal contamination.

The boxes were sold in the United States, Puerto Rico and some Caribbean and South American countries, but not Canada.

Another reason to avoid this dangerously legal food is the yellow 5 and yellow 6 food dyes. Both have been found to contain benzidene or other chemicals that cause cancer. Both causing hypersensitivity reactions. Yellow 5 causes genotoxicity, which means it damages the genetic information within a cell causing mutations, can halt cell production and may lead to cancer.

According to a 2012 study on the toxicology of food dyes, “The inadequacy of much of the testing and the evidence of carcinogenicity, genotoxicity, and hypersensitivity, coupled with the fact that dyes do not improve the safety or nutritional quality of foods, indicates that all of the currently used dyes should be removed from the food supply am replaced, if at all, by safer colorings.”

The health and food industry intentionally has very limited studies on the dangers of toxicity and, then, uses the excuse that not enough information is available to conclude if these are actually dangerous.

They don’t do the study, then they use the excuse that there’s not enough studies. Yellow 5 and 6 are a slow death, banned in Europe. Please don’t eat the stuff or feed it to your kids! Pass this information on to the people you care about.