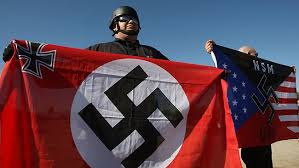 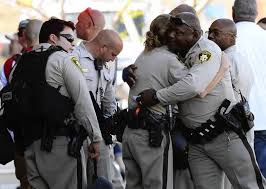 Las Vegas Wal-Mart Gunmen Believed To Be White Supremacists. A man and woman who fatally shot two Las Vegas Metropolitan police officers and one civilian inside of a Walmart before killing themselves on Sunday, are believe to be white supremacist. The gunmen, who were married, possessed white supremacist paraphernalia and spoke of targeting police officers. The Las Vegas Review Journal reported that officers searched a small apartment complex about 4 miles from where the incident occurred. 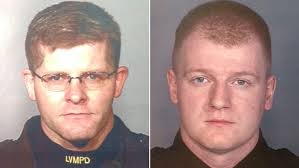 The identities of the suspects have not been released, but law enforcement officials say the suspects were married and in their 20s. They also report that the couple was new to the Las Vegas area. In their apartment, reports say they found swastika symbols and other white supremacist paraphernalia. One of the neighbors, Krista Koch, described the couple as militant, saying he talked about planning to kill police officers as well as going underground and not coming out until the time was right. Another neighbor, Brandon Monroe, said the man who lived in the apartment always talked about conspiracy theories and dressed in camouflage or even sometimes dressed as Peter Pan. 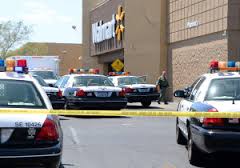 The shooting spree began late Sunday morning around 11:30 AM. Police told the Las Vegas Review Journal that the two officers were killed by a man and woman who approached them at CiCi’s pizza On Nellis Blvd and Stewart Ave just before 11:38 AM while they were eating lunch. One suspect approached the first officer and shot him point blank in the head, then the second suspect shot the other officer. They stripped the officers of their weapons and ammunition and went into the Walmart at 201 N. Nellis Boulevard in Las Vegas. Deputy Sheriff Kevin McMahill told reporters at the news conference that the male shooter, described as a tall white male, yelled “Everyone get out” before shooting in the Walmart. The man and woman proceeded to the back of the store and “there was some kind of suicide pact,” McMahill said. They said many times this was the start “Of the new revolution.” Authorities are not sure how many people are involved in this “revolution”, or if this will happen again locally in Las Vegas by other white supremacist members, or any other locations across the country. All they suggest this to be aware of your surroundings.