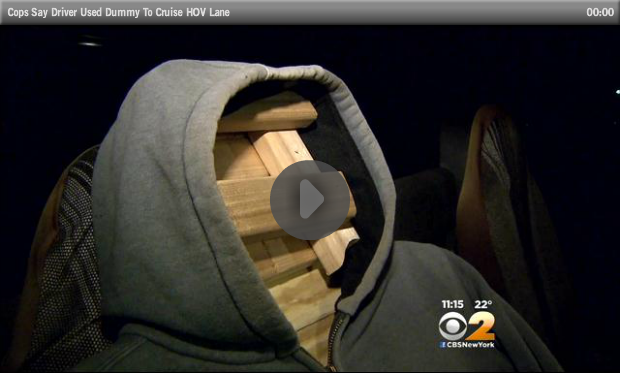 Man Builds Fake Dummy To Use The Carpool Lane. A driver in Long Island, New York has been recently charged with violating a high-occupancy vehicle lane by driving, not by himself, but with a passenger that the man made out of wooden sticks. Even though the man, 56-year-old James Campbell, was caught he says that it won’t stop him from doing it again. 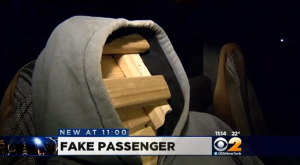 “I’ll change [the dummy’s] outfits,” Campbell told CBS New York in reference to continuing to drive with his wooden accomplice in the car.

A highway patrol officer had pulled Campbell over on Friday for speeding and requested not only the ID for Campbell, but also insisted that his passenger show identification as well. When the officer found out about the dummy he tried his best to remain professional.

“I was trying not to laugh at the guy because I thought it was quite silly,” Officer Jonathan Abrams told NBC. In the photo you can see that the dummy seems to be made of 2×4’s.

What was the reason behind Cambell’s stiff attempt to break the law? He had apparently told the officer he made the dummy because he didn’t want to be late to his new job.

Cambell was charged with speeding and occupancy vehicle violation, but seeing as how the decoy passenger wasn’t confiscated he’s bound to do it again. In fact he told CBS New York that after he started to drive home, he once again got in the HOV lane. This time without being caught.

Weirdly enough Cambell also added that he thinks making these is “fun” and even has made a sister passenger that “wears a tutu.”