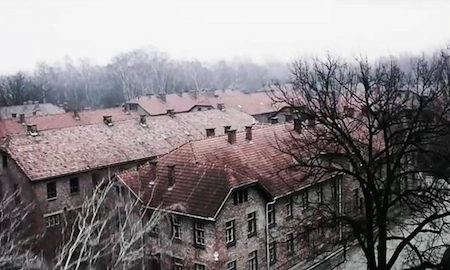 Auschwitz was among the most brutal and deadly former Nazi concentration camps.

Located in Poland, Auschwitz remains preserved as a World Heritage Site and is visited by thousands of tourists and survivors every year.

Watching this haunting footage captured by drone is the next best thing to visiting the camp firsthand – it will chill you straight to the bone.

Upon entering the camp, victims were greeted by a sign that read “Arbeit Macht Frei,” which translates to “work will set you free.” While innocent, fearful, sick and malnourished victims were forced to work, the camp was never designed to let anyone go free regardless of work ethic.

The sole purpose of Auschwitz was to exterminate everyone that entered. Families were ripped apart, men send one way and women sent another, most would never see their loved ones again.

Some may wonder why the camp remains if it only holds devastatingly haunted memories of the past. The preservation of Auschwitz is key to never forgetting what was allowed to take place here. We will never forget the many beautiful and innocent souls lost at Auschwitz. For the moment we do, we risk letting something like this happen again.