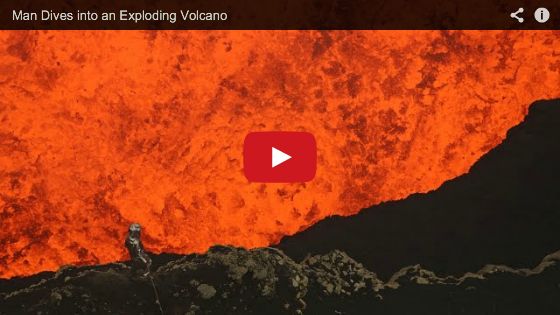 Man Jumps Into Active Volcano With A GoPro.

As a explorer and documentarian, George Kourounis has done some pretty amazing and crazy things to capture nature in it’s most intense states.

He specializes in capturing extreme forces of nature, everything from chasing twisters to even getting married next to an exploding volcano. Well this time Kourounis decided he was going to get a little closer to the action and actually descend down into an active volcano..and film it all.

Kourouis and his fellow explorer Sam Cossman dove deep into the Marum crater, located in an active volcano by the archipelago of Vanuatu in the South Pacific.

They brought a GoPro with them as well as a Canon 5D Mark III and a Sony NX Cam to capture all of the amazing footage. “Going down into the crater of Marum has been a dream of mine for many years,” Kourounis told the Huffington Post. “It was exhilarating to say the least.”

Cossman and Kourouis also had the help of two guides, Geoff Mackley and Brad Ambrose. Together they descended twice into the crater over a four day period.

That’s quite a feat considering they are constantly fighting the elements like hot lava and acid rain. “Getting to [Marum] was kind of like a reverse climbing of Everest,” Kourounis said. “The volcano fought back at us, and we had to deal with terrible weather, tremendous heat from the lava, descending and ascending 400 meters of near vertical, loose rock face, acid rain so strong that it could have come from a car battery, and a variety of other craziness.” 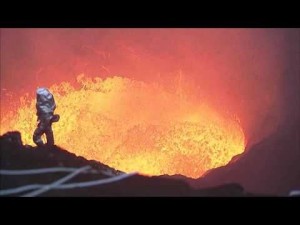 Kouronuis apparently got so close to the lava that it burnt a hole right through his protective jacket and also though one of the cameras.

“When you see that shot of me looking like a little silver dot, next to what appears to be a waterfall of lava, that was an extremely dangerous spot to be standing. It was a bit scary. If something were to have gone wrong. It would’ve happened quickly, and catastrophically.”

Check out the awesome footage they captured below: