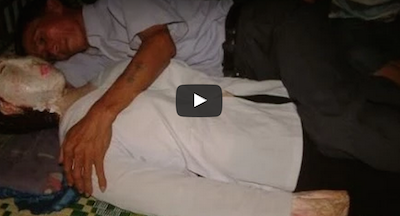 They say love knows no boundaries, but this is taking it a little too far. A Vietnamese man has been sleeping next to his wife’s corpse for the last five years.

Le Van, A 55-year-old man from Quang Nam Providence, Vietnam, lost his wife. Because he could not go to sleep at night without hugging his beloved spouse, he slept on top of her grave for about 20 months. When he couldn’t stand the rain and wind anymore, he decided to dig a tunnel into the grave so he could sleep with his wife.

When the kids heard his crazy plan, they did everything they could to stop him, so Le Van had to think of another way he could cuddle up with his wife at night. Shortly after, he unearthed her remains, wrap her in pieces of paper and a clay mold and put a dummy mask on her face. The man has been sleeping next to his dead wife ever since.