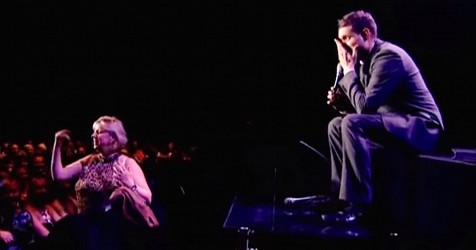 Canadian singer and songwriter Michael Buble is known to interact the fans that attend his concert.

He’s chatted with them, sang with them, but I bet he’s never experienced something like this before!

At one of his performances, he was taken back when he met a very fervent mom, who insisted her 15-year-old son, Sam Hollyman, was a great singer and would love the opportunity to perform with him.

Buble, not knowing what to do, decided to just go with what his mother was saying.

He invited Sam on stage with him, and then he asks the band to play “Feeling Good.” Once Sam sings a few notes, Buble is stunned and exclaims, “Sam can sing!”

Watch in the video below as the two of them perform a memorable duet together.