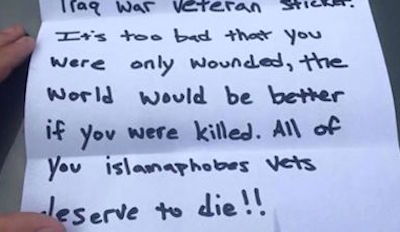 Military Vet Finds This Hateful Note On Car And You Won’t Believe What It Says!

A simple trip to the store ended with a veteran getting a hateful letters left on his car.

When a local Iraq war veteran was shopping Thursday morning, he did not expect to find an anonymous note with ugly language left on his car.

The letter blasted the Marine for having a Purple Heart and serving overseas. It stated, “All of you Islamaphobe vets deserve to die.”

The note has people shaking their heads. Some called the author pathetic.

“Makes me sick to my stomach,” Navy veteran Robert LaPrairie said. “To me, it’s an act of terrorism really.”

News 10 ABC showed the note to Lieut. Steven Stockdale from the Warren County Sheriff’s office to determine if the person who wrote it could face charges.

“That’s the first thing I look for,” he said. “When we see something like that – is there a potential criminality?”

Stockdale said it is illegal to leave a note on a windshield, but he said the biggest disappointment is that the author thought writing a letter was okay.

“Communication these days has gotten very easy for people who want to stay anonymous,” he said. “And it takes a lot more courage to strap on an 80 pound pack and go to the Middle East and fight for your country than it does to scribble on a note and leave it cowardly behind on someone’s windshield.” 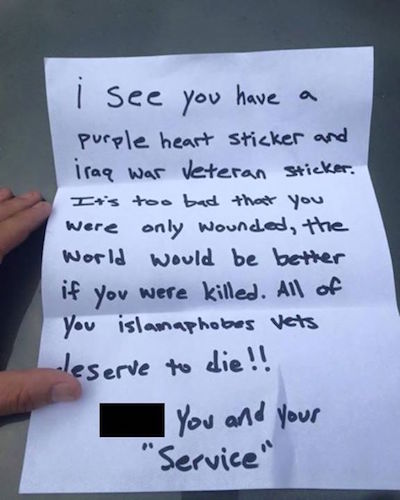