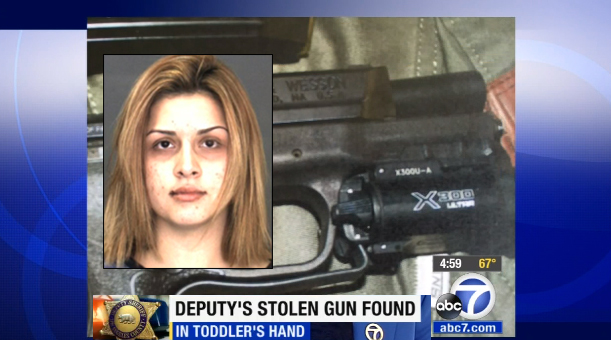 Police in California were a little startled when he three-year-old came out of the bedroom and pointed a loaded semi automatic weapon toward them.

The NY Daily News said detectives in San Bernardino were speaking with the child’s mother, 20-year-old Kimberly Torres, when the little girl casually walked out of the back room with the gun. Reports say the black loaded gun had a tactical light attached to it, and could have easily gone off.

The weapon was taken without incident from the baby and the mother was arrested and charged with suspicion of child endangerment and possession of stolen property. During an investigation of how this little girl gained access to the weapon, police learned the gun was actually stolen property from an off-duty cop.

Just last week, according to ABC News, two guns, a service belt and other items were taken from a Los Angeles Sheriff’s deputy and that was one of the weapons. It is unclear if Torres was the person who is responsible for the alleged theft, where she received the weapon after the incident.

During a recent traffic stop, the other weapon was found in the possession of 25-year-old Raymond Quintero. Reports say he was driving a vehicle that led them back to Torres, that’s why police showed up at her home.

The three-year-old was taken from the home and put into custody of Child Protective Services.