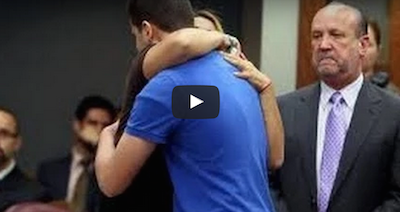 Two years after her 13-year-old daughter was shot and killed inside a school bus, a Florida mother faced her child’s killer in court and did something so profound, it stunned everyone gathered: she approached the young man, and hugged him.

The teenager responsible for the girl’s death, 16-year-old Jordyn Howe, is said to have been overcome with emotion as his victim’s mother held him in her arms. “I’m sorry,” Howe told the woman, while fighting back tears.

You can watch this emotional act of forgiveness in the video below. Could you embrace your child’s killer? Share and comment with your friends!