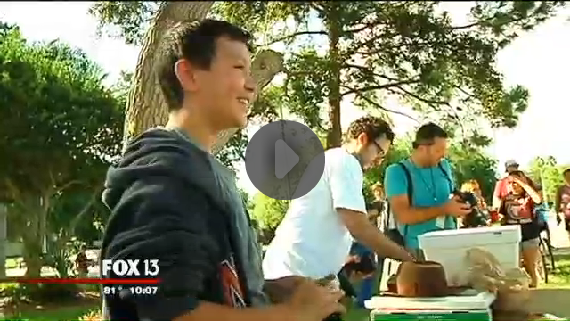 Neighbor Tries To Shut Down Kid’s “Illegal” Lemonade Stand. When you were a kid there were only so many ways that you could make money. You could “start your own business,” as I’m sure your mom told you when you asked for money. This usually included things like mowing people’s lawns or starting a lemonade stand. Well this 12-year-old boy in Dunedin, Florida opened up his own lemonade stand and now one of his neighbors is trying to shut down his “illegal business.”

Doug Wilkey, 61, has contacted City Hall at least four times to try and get his neighbor, T.J. Guerrero’s lemonade stand closed down. What’s this guy’s problem you might ask? Well according to one of the complaints written by Wilkey, “Please help me regain my quiet home and neighborhood,” wrote Wilkey. Who continued to say that the stand is causing excessive traffic, trash, illegal parking and noise.

The stand itself, at the time, was only serving about 10-30 customers a day. Which could hardly cause a overcrowded, noisy, and trashed neighborhood. Since the local news station did a report on the lemonade stand however, hundreds of locals came out to support the young boy and his business. It seems as though the man’s complaints may have backfired. T.J. made over $600 in two hours that day.

Even the mayor of Dunedin, Dave Eggers, supports the entrepreneurial pre-teen, “I think it is a great show of entrepreneurship. This 12-year-old is setting a great example. I don’t know what the other neighbor’s problem is, but I would like to talk to him to try to figure it out.” Let’s hope he does, someone need to set that neighbor straight.