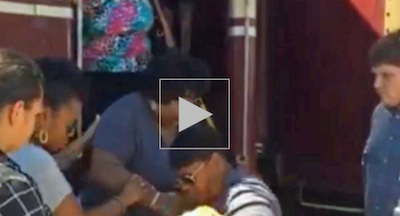 It was supposed to be a book club outing, a day of bonding, wine and fun for a group of mostly black women writing the popular Napa Valley Wine Train.

But the trip was unexpectedly cut short, they say, because they laughed too loudly.

Right after Antioch author Lisa Reneé Johnson – one of the women from Saturday’s group who live blogged the entire incident on Facebook as it kept unraveling – posted a video of the women enjoying some reds, whites and appetizers, her next update was a photo of a woman she claims was annoyed by the laughter because the train was “not a bar.” The complaint resulted in the group of 11, all but one of whom is black, getting kicked off the train.

“We were truly kicked out because we were ‘laughing while black’… it was racially charged,” Johnson told NBC Bay Area Monday.

Johnson said Wine Train CEO Tony Giaccio had personally apologize to her Monday, but added that “it wasn’t authentic.”

“In order to solve the problem, you have to first admit there is one,” she said. “They are apologizing for the bad experience, but not because of the role they played in the whole experience. They are not saying ‘We are the bad actors.'”

Although the wine train refunded the groups tickets, outrage is spreading fast on social media. “We are totally humiliated.” Johnson said, adding that the group is guilty of nothing except #LaughingWhileBlack, a hashtag that has caught on online, where people are reacting with both humor and anger.

Johnson said that the group will decide whether to pursue a lawsuit or a civil rights campaign against the Wine Train.