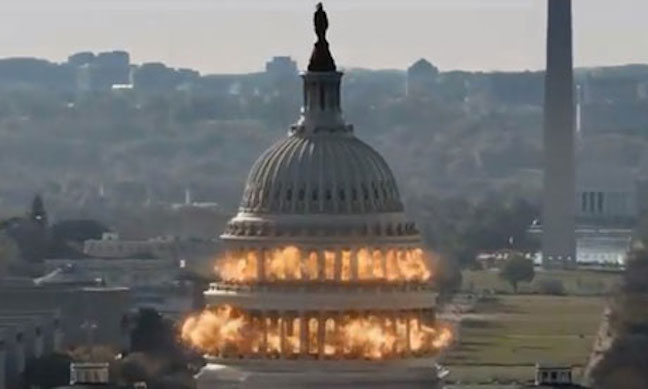 North Korea Threatens To Blow Up The White House Over Movie Release.

North Korea has threatened the United States again for the release of the Sony film ‘The Interview’. Just hours later, on Saturday, they suffered yet another countrywide Internet blackout. When will they learn?

“The Democratic People’s Republic of Korea (DPRK) has already launched the toughest counteraction. Nothing is a more serious miscalculation in guessing that just a single movie production company is the target of this counteraction. Our target is all the citadels of the US imperialists who earned the bitterest grudge of all Koreans. The army and people of the DPRK are fully ready to stand in confrontation with the US in all war spaces including cyber warfare space to blow up those citadels. Our toughest counteraction will be boldly taken against the White House, the Pentagon and the whole US mainland, the cesspool of terrorism, by far surpassing the ‘symmetric counteraction’ declared by Obama.”

However, KCNA in its post continuously denied its association with the Sony hack that happened last month in which a group of hackers, the Guardians of Peace,  infiltrated the computer network of Sony Pictures Entertainment and stole a huge number of confidential documents. The FBI revealed that the cyber attack was backed by the North Korean government, which was livid at Sony for producing ‘The Interview’.

Just last week, North Korea described US Pres. Barack Obama as a monkey for encouraging theaters to screen ‘The Interview’. It also blamed America for shutting down DPRK’s Internet for hours  after the Sony hack. “Obama always goes reckless in words and deeds like a monkey and a tropical forest,” an unidentified spokesman at the commissions Policy Department said in a statement released by KCNA.

Personally, I saw ‘The Interview’ over the weekend and thought it was absolutely hilarious. I would encourage everybody to go out to see the movie or rent it on your Xbox console or YouTube for just $5.99.